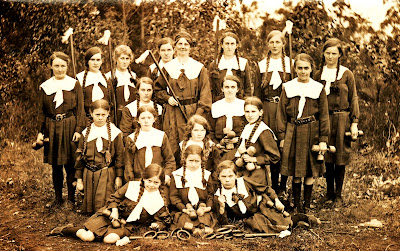 - Which ones? I am related to ten of the girls. One of them is my grandmother.


You may find their details below.


IN ANSWER TO THE Question of Relationship to the South Wandin – Silvan Girls Guild, about 1919

[ pictured in the headpiece'


- Which ones? I am related to ten of the girls. One of them is my grandmother.

4. At far right is our paternal 3rd cousin 2x removed Beatrice Martha Maria CALLCOTT (1904-1928) a daughter of Jessie Rose PARKER (1868-1905) who died young so that her motherless children came to Silvan to live with grandparents and cousins.

And 7., at right on the left of the leader is our maternal 1st cousin 2x removed Hilda Margaret JOHNS (1907 – 1974) later a schoolteacher who later married the Silvan South School head-teacher Alfred Mervyn HOLLOW (1902-1962).

10. And at right is a great-aunt of the blood, our grandma’s sister Dora Amelia CHAPMAN (1905-1936) who died young while playing the organ at Silvan Methodist church.
Prone.

AND, TO make it fifteen I could include the three MATTINGLEY sisters who my ancestry site tells me are related, by being "nieces of the wife of brother-in-law of 3rd cousin 2x removed". But that is a step too far for understanding, - unless you ladder back down several generations and then ladder back up again.


A note on the MATTINGLEY girls . I think two of their name listings must be wrong and need swapping.

The Bowmans had the Nathania Springs Cafe in Monbulk for many years.

The Mattingley's had a younger sister Myrtle Sarah MATTINGLEY (b.1912 Wandin Yallock) who was I suppose then too young for Girls Club.

So, anyway the younger, Florence Mattingley is clearly the smaller one kneeling lower in the picture, so the caption names for her and her for sister Doris Mattingley should be swapped around.

I put this info here because I can no longer amend or edit the very full original blog site. 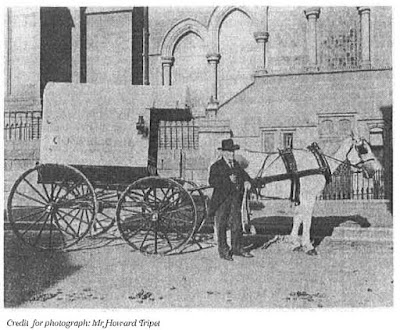 Between Sundays, pioneer Baptist preacher, Reverend Albert Ager, of Stringybark Creek, Wandin & Lilydale travelled the Upper Yarra with a Gospel Car like this one.

"Gospel Vans In Australia: -The first Colonial Baptist vehicle, still horse-drawn, four wheel, was in operation in Tasmania during the 1880s to the turn of the century. It was manned by Spurgeon College graduate, William Lake, whose main emphasis was colportage (that is a word to describe Bible distribution). He also preached evangelistically where possible. About the same time Rev. Albert Ager was reportedly doing the same sort of ministry east of Melbourne." - from a paper "New South Wales Gospel Van Ministry" delivered by R M (Bob) Armstrong, 2 August 2001. published in The Recorder No.4 of 2001.

THE FAMILIES OF / ORIGIN 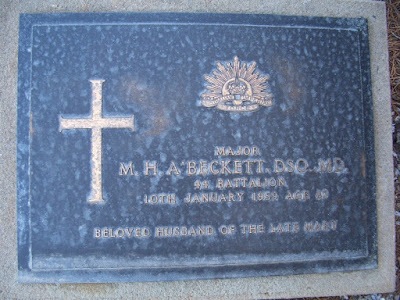 
AGER, Reverend Albert J. -b.1841 Hartest, Sudbury, Suffolk, England, Great Britain - son of the Sudbury-born Carpenter, Nathan AGER & Hannah RANSOM - (m.April 1862 London, England to Mary Marian SMITH) - Non-Conformist Clergyman- (Baptist) - - Emigrated to TASMANIA - then VICTORIA - - Was the Minister at Lillydale in the early 1880s - when he took up a Small Allotment beside the Stringybark Creek, in South Wandin Yallock -CROWN GRANTEE -He was conducting services in the Baptist Church in Sale, Gippsland in January 1883 - was Farewelled from Lillydale Baptist Church in June 1883 - He then Ministered in Portland, Vic. till 1886 - He was preaching in the Launceston Baptist Tabernacle, Tasmania, in August 1890 - he was Baptist Minister in the Southern Yorke Peninsula, South Australia in 1892 - later emigrated to NEW ZEALAND - - d.1913 Christchurch, Canterbury Plains District, New Zealand
AGER, Mary Maria /Marianne SMITH - b.1841 Lavenham, Suffolk, England, Great Britain - Daughter of William SMITH & Anne TURNER - Emigrated to TASMANIA - then VICTORIA - then NEW ZEALAND - d. 1901 Dunedin, Otago, New Zealand

ALEXANDER, A - Berrygrower of Silvan 1934 who was in this bus-train Level Crossing crash at McKillop/ Mt Evelyn

When the service bus in which they were travelling was almost torn to pieces after having been rammed by the Warburton train last Saturday morning, the three passengers and the driver had miraculous escapes from injury. The accident occurred at the level crossing one the Warburton side of the Mt. Evelyn station.

The three passengers were Mrs. Dorothy Glaum, 28, & Miss Edith Slater (sisters) 19, of Painter street, Richmond, & Mr. A. Alexander, a berry grower, of Silvan. The driver was Mr. J. Oats, also of Silvan. The crossing is about 150 yards from the Mt. Evelyn station, and the train was just coming round a bend in the line near the crossing when the bus approached. Unable to stop in time, the train struck the car side on, turning it over on its side & smashing it beyond repair, at the same time dragging it along the line for some distance.

When railway employees heard the crash they ran from the station to render assistance to the passengers, but were surprised to find that none of them were seriously hurt. Mrs. Glaum, suffering from shock, & Miss Slater. who received abrasions to the face & shock, were taken to the Lilydale Hospital. Mr.Alexander, an elderly man, was also severely shaken, but was able to go home. Mr. Oats was thrown some distance from the truck, but the three passengers were caught in the tangled bodywork of the car.

After having helped the two women to a nearby house. Mr. Oats collapsed and was taken to his home. The train was delayed at Mt. Evelyn for 57 minutes while the wreckage was removed from the rails. A rope had to be attached to the engine & the car removed in that manner. The track and cattle pit also suffered slight damage.

Mr. W. W. Bowring, whose shop is situated about 50 yards front the crossing, was one of the first to reach the scene of the smash. When he heard the crash he wondered what had happened & on seeing the wrecked car he could scarcely believe that its passengers could have had such a miraculous escape. His surmise is that the train could not have been travelling fast at the time of the collision, as it does not usually gather speed until it rounds the bend near the crossing. 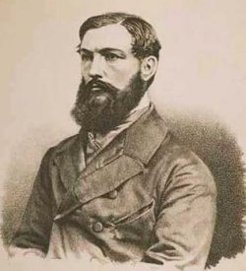 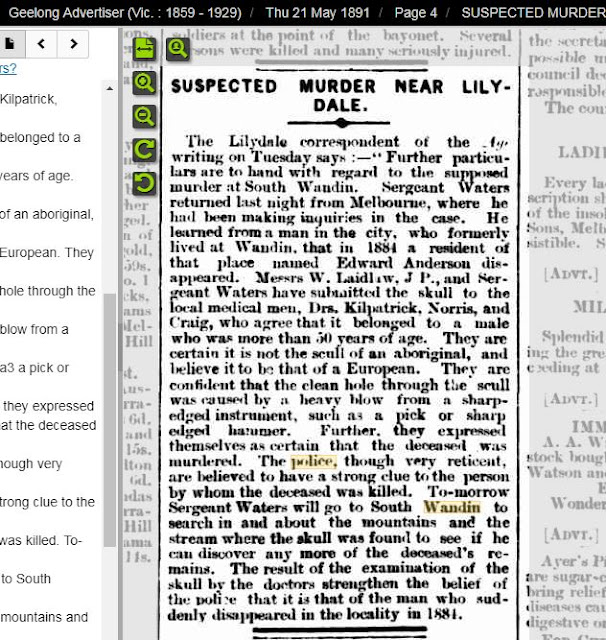 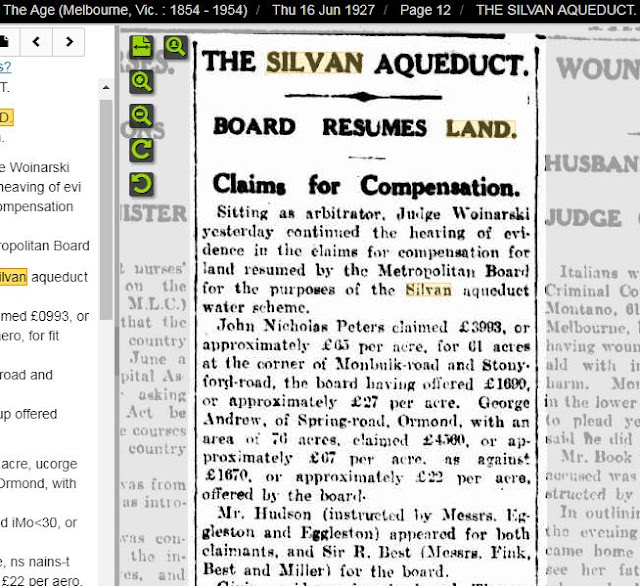 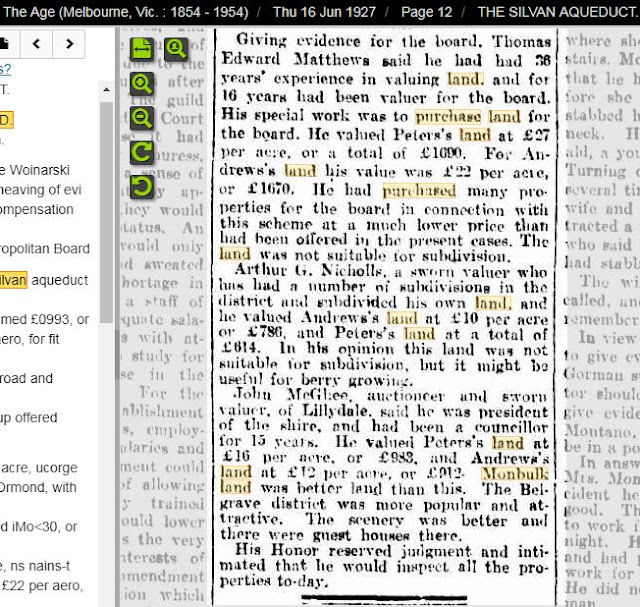 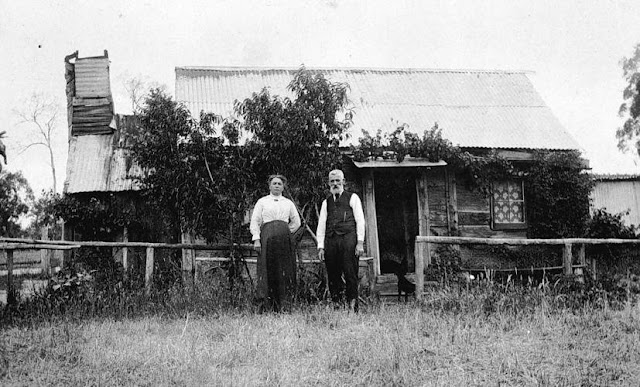 5. AXFORD - Kept a market garden first by the Yarra at Abbotsford and later at Mooroolbark.